Why We Stay (A Review and Giveaway) 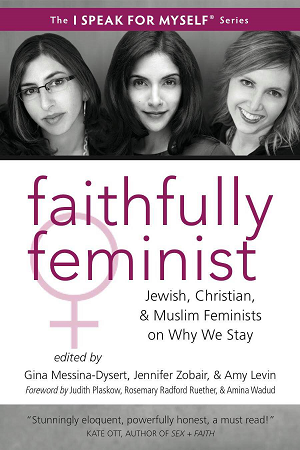 It’s important for me to put my body in “conservative” spaces, religiously speaking. In part, it’s why I moved across the country five years ago to attend Duke Divinity School when the Graduate Theological Union was only pedals away. I need regular reminders that my presence – my sturdy, female presence – is still challenging for some and made all the more so when I open my mouth and meet my front teeth with my bottom lip to speak the word feminism. I move in those spaces, sometimes even stay in those spaces, because I want to learn how to belong among all kinds of God’s people. I want to learn how to love all facets of God’s nature.

I also love a good fight.

In the forthcoming anthology Faithfully Feminist: Jewish, Christian, and Muslim Feminists on Why We Stay (White Cloud Press, August 2015), forty-five young women tell stories of their fight to claim the feminist label and stay at faith-full tables. “The conflict… is real,” scholars Judith Plaskow, Rosemary Radford Ruether, and Amina Wadud assure us in the foreword – even, they note, when “it is generated by other people’s expectations that those two identities are separate and irreconcilable.” Making peace with my dual identity is only part of the practice. Helping others make peace with the notion that there is no duality – that Christianity is feminist – is the ministry of a lifetime.

The anthology is the sixth volume in the I Speak For Myself series and the format will be a familiar one to fans of Talking Taboo. Co-editors Jennifer Zobair, Amy Levin, and Gina Messina-Dysert (also one of our Talking Taboo contributors) have culled a diverse group of Jewish, Christian, and Muslim feminists to reflect on why they endure in patriarchal traditions where it is so often a struggle to reconcile what seem like conflicting commitments. Like surrender and agency, as the opening essay by Deonna Kelli Sayad puts it. Or tradition and innovation, a paradox Miriam Peskowitz raises in one of my favorite pieces. (She also asks the honest question, What do we do when the spark of the struggle fades?) It’s the tension between choosing the fight and protecting against abuse that I found most compelling in Messina-Dysert’s own essay when she confesses she wants her daughter to embrace her Catholic community, even as she fears her daughter will be made to feel “less than” in it.

I know plenty of feminists who are no longer part of faith communities because the struggle wore them out. When I published my own “why I stay” story at age twenty-four, journalist Susan Campbell responded that while she admired my commitment, for her, “the battle over the years grew to be too wearing.”

I am beginning to understand this. Just this Sunday I found myself shaking over a sermon on God the Father that relied more on pop psychology references to masculinity than biblical ones. How long, O Lord? a male friend prayed with me when the sanctuary had emptied.

But I have also come to the slow understanding that feminism at its best isn’t just about supporting women in power but relinquishing the power of privilege and I know of no better example of this than the person of Jesus, Jesus who the Christian Scripture tells us gave up divine privileges and took on human flesh so that we might be able to make peace with God and one another.

His was the ultimate ministry of reconciliation.

For those of us who understand that ministry as our own, Faithfully Feminist is a balm for the weary. Its multi-faith content will give readers a fresh wind for sustaining the good fight. Because of it I now have a new list of rituals, ideas, and teachers that I want to explore in an effort to move “beyond rhetoric and terminology towards content and personal affirmation,” as the foreword admonishes. This anthology is a start. We can always start close in as the poet says.

We can read a book.

We can pursue education.

We can find an ally and invite her or him to the table with us.

I can romanticize the struggle. I know I can. I talk slick about wanting more theological diversity at church or more relationships across socio-economic lines, and then I get my feelings hurt and my ego bruised when worldviews collide. It’s then I need to be reminded not of the necessity of the fight but of humility. Thanks to an essay in Faithfully Feminist by Caroline Kline, I now have new words to pray in times like those, words from Mormon feminist Joanna Brooks:

God, make me brave enough to love my people.
How wonderful it is to have a people to love.

HEY READERS! Faithfully Feminist is available for pre-order now but in the meantime I’m giving away a copy of its sister volume, Talking Taboo, signed by yours truly and dedicated to whomever you’d like. To find out the multiple ways you can enter, click here. The giveaway ends June 30th.

This entry was posted in Uncategorized. Bookmark the permalink.

6 responses to “Why We Stay (A Review and Giveaway)”